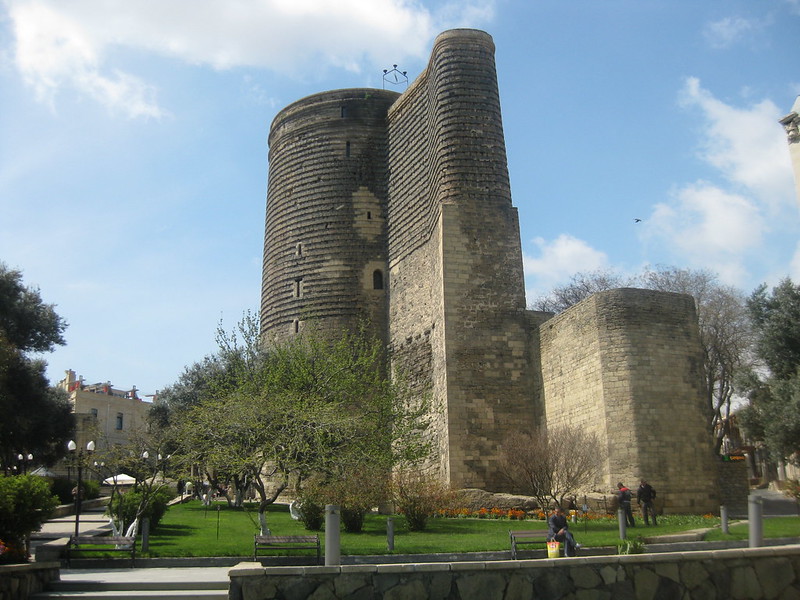 Combination of contemporary world and ancient times, East and West – yes, you are in Baku.

Baku is the capital city of Azerbaijan; it is located in the Caucasus, at the crossroads of Europe and Asia, right next to the Caspian Sea. If you are tired of the rush hour of the modern life and seeking to see something spiritual and ancient, then you’re in the right place..

In this post, we are going to explore Icheri Sheher, aka The Old City. It is the historical core and most ancient part of Baku, even more it is classified as a UNESCO World Heritage Site. Scholars argue that this place dates back to the 12th century. Mind-blowing architectural structure of Old City will make you enjoy your time.

Let’s get to know 5 landmarks in Icheri Sheher that you must see.

Baku Fortress Wall is a door opening to a labyrinth – a whole ancient world. Once you step in the Fortress Wall, you unleash the mystery of the Old City.  The whole concept makes you feel like you are travelling in time, getting to know the culture and ancient architecture better.

The gates are located on the northern side of the fortress walls, being the main entrance gate from the land side of Baku Castle. Its illustrations are depicted by many famous artists such as  Engelbert Kaempfer, Aleksey Bogolyubov, Grigory Gagarin, Vasily Vereshchagin, Aleksandr Kuprin and so on.

Maiden’s Tower used to be the highest place in Baku during the medieval ages. It was built in the XII century.  Once you go up to the top of the Tower, you can see the city beneath your feet; enjoy the calmness and beauty of the Caspian Sea.

Do you love challenges? Then, you’ll love the Maiden’s Tower, as climbing to the top of it will require climbing many stairs inside an ancient tower.

Although centuries and years have passed, the history of Maiden’s Tower still remains a mystery to us. To this day, despite the fact that various versions have been put forward around this monument, it is not known exactly when and for what purposes it was built.

There are just different versions out there.

According to some scholars, this fortress had a military and defensive purpose.

According to one legend, it was built by a king for his daughter who loved watching the Caspian Sea. She was in love with a boy, but their love was impossible and she threw herself down from the top of the tower.

The caravanserai is located on the commercial street of ancient Baku, next to the Armenian Church of the Holy Virgin.

There is an open courtyard in the center of the first floor of the Caravanserai. The courtyard consists of a number of large rooms. The side walls of the rooms protrude forward and form small balconies that are closed from the sides.

You can get in the first floor; look around the mystic ancient world from the small balconies.

The arrangement and forms of the rooms on the second floor repeat the planning of the first floor.

The Caravanserai’s multicultural and ancient atmosphere is like nothing you’ve ever seen before. You get to know both Muslim and Christian World from the ancient times.

4. Palace of the Shirvanshahs

Wanna see Royal life of the Eastern world? Bingo! Go and see the Palace of the Shirvanshahs!

It is believed to be constructed during the XIII – XVI centuries. It is described by UNESCO as one of the pearls of Azerbaijan’s architecture. Here, you can get to know how royal palaces were built in the Muslim world during the medieval ages.

The majestic and luxurious Divankhana was built on a high platform, surrounded by an arched porch on 5 sides within the Palace. The entrance portal of the divankhana is rich with intricate patterns carved on the stone, and leaves taken from the flora of Azerbaijan are depicted. The verses of the Islamic religion are engraved on the frame of the portal.

If you are interested in the cultures and religions of local people in the countries you visit, then the Palatial Mosque is a must-see-place. The mosque is located in the lower courtyard of the Shirvanshahs palace complex, along with the Shirvanshahs tomb and the Palace bath.

The height of the mosque is 22 meters.

The inscription surrounding the minaret is engraved: “The great Sultan Khalilullah I ordered the erection of this minaret. May God increase his kingdom and the years of his rule 845”.

There is a well and a small pool on the north side of the courtyard, on the high square, for washing and ablution.

The mosque is very simple in terms of architectural form. Its entrance portal is unadorned, but the minaret attracts attention with its elegance and beauty. The stalactites that protect its balcony and the writing belt located below it are worked with high craftsmanship.